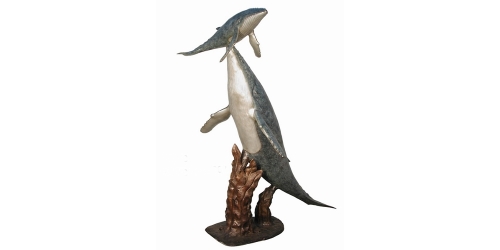 Our friends at DEFENDERS OF WILDLIFE have given us their permission to share this important information about the dangers of extinction of many species and their ADOPT A BLUE WHALE Program. Your donation supports DEFENDERS OF WILDLIFE work to ensure that whales remain protected under The Endangered Species Act and their efforts to educate the public about the threats whales confront.  If you would like to make a donation to the DEFENDERS OF WILDLIFE Adopt a Blue Whale program please click on the link at the bottom of this blog. If you are interested in purchasing a bronze whale fountain or statue click our link at the bottom of this blog. Bronze-Depot.com will make a donation from the sale of each whale fountain or statue to ADOPT A WHALE.

Whales belong to the order cetacea, which includes whales, dolphins and porpoises. Whales are mammals, and as such, they have hair—though very little of it! Beneath the skin lies a layer of fat called blubber. It serves as an energy reservoir and also as insulation. Whales breathe through blowholes, located on the top of the head so the animal can remain submerged. Baleen whales have two blowholes, while toothed whales have one.

Whales are divided into two suborders: baleen and toothed whales. Baleen whales have a comb-like fringe, called a baleen, on the upper jaw, which is used to filter plankton, as well as small fish and crustaceans. They are the largest species of whale. Toothed whales have teeth and prey on fish, squid, other whales and marine mammals. They sense their surrounding environment through echolocation.

Like all mammals, whales breathe air into lungs, are warm-blooded, feed their young milk and have some (although very little) hair. Their bodies resemble the streamlined form of a fish, while the forelimbs or flippers are paddle-shaped. The tail fins, or flukes, enable whales to propel themselves through the water. Most species of whale have a fin on their backs known as a dorsal fin.

The Blue Whale is the largest known mammal that has ever lived, and the largest living animal, at up to 110 feet long and 150 tons.

Because of their environment (and unlike many animals) and because they need to breathe air by coming to the water’s surface, whales are conscious breathers, meaning they decide when to breathe. All mammals sleep, including whales, but they cannot afford to fall into an unconscious state for too long, since they need to be conscious to break the surface in order to breathe

DIET: The diet of whales depends on their species; it can range from microscopic plankton to large marine mammals.

POPULATION: Varies with each species.

RANGE: Whales live in all of the world’s oceans, though their specific range varies by species.

BEHAVIOR: Many whales, especially baleen whales, tend to migrate long distances from their cold-water feeding grounds to warm-water breeding grounds each year. They travel alone or in groups, or pods, on their annual migrations. Toothed whales often hunt in groups, migrate together and share young-rearing duties.

REPRODUCTION: Mating season: Varies depending on the species.

GESTATION: 9-15 months, depending on the species.

OFFSPRING: 1 calf. Nursing time is long (more than one year for many species), which is associated with a strong bond between mother and young. This strategy of reproduction spawns few but provides each with a high probability of survival in the wild.

THREATS TO WHALES: The effects of climate change will be felt by most marine creatures, and whales are certainly not excluded. Sea level rise and changes in sea temperature will leave whales quite vulnerable, and they may not be able to adapt quickly enough to survive. Arctic and Antarctic whale habitat faces a particular threat from climate change. Whale food sources will also face challenges, such as a decline in krill population, which is the main food source for many large whale species.