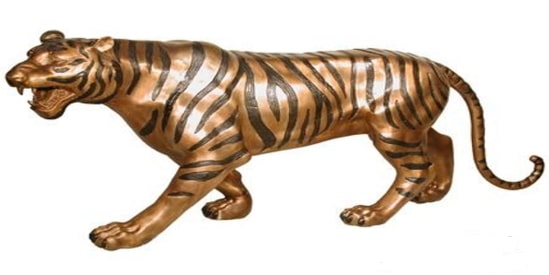 Our friends at DEFENDERS OF WILDLIFE have graciously given their permission for us to share this vital information about the plight Tigers encounter and their ADOPT A TIGER program. Your adoption supports DEFENDERS OF WILDLIFE’S work to ensure that tigers remain protected under the Endangered Species Act, the Convention on International Trade in Endangered Species of Wild Fauna and Flora (CITES), and other international laws and treaties, and their efforts to educate the public about the threats that these amazing animals face.  If you would like to make a donation to the DEFENDERS OF WILDLIFE Adopt a Tiger program please see the link at the bottom of this blog. Bronze-Depot.com will make a donation from the sale of each Tiger to ADOPT A TIGER. If you are interested in purchasing a bronze replica statue of a Tiger for a school mascot, zoo, restaurant, wildlife park, resort or storefront click our link at the bottom of this blog.

The Tiger is the largest member of the felid (cat) family. They sport long, thick reddish coats with white bellies and white and black tails. Their heads, bodies, tails, and limbs have narrow black, brown or gray stripes. There were once nine subspecies of tigers: Bengal, Siberian, Indochinese, South Chinese, Sumatran, Malayan, Caspian, Javan, and Bali. Of these, the last three are extinct, one is extinct in the wild, and the rest are endangered.

Tigers have long been a target of poachers for their unique fur. In addition, their body parts, which are used in traditional Asian medicines, are highly valued on the black market. Tigers are also seen as threats to human communities and may be illegally killed for coming into close proximity to people. This is especially concerning as human communities continue to expand and encroach into tiger habitat. In addition to the loss of habitat due to human population growth and development, tigers are also suffering habitat loss from the effects of climate change. As sea levels rise eroding coastal areas like India’s Sundarban Islands, and as seawater moves up river, tigers must move northward to find sources of freshwater. This puts them at greater risk of conflicts with human populations.

POPULATION: In the early 1900s, there were around 100,000 tigers throughout their range. Today, an estimated total of around 3,000-4,500 exist in the wild. Below is a breakdown of tiger numbers by subspecies.

BEHAVIOR: Tigers occupy a variety of habitats from tropical forests, evergreen forests, woodlands and mangrove swamps to grasslands, savannah and rocky country. They are mostly nocturnal (more active at night) and are ambush predators that rely on the camouflage their stripes provide. Tigers use their body weight to knock prey to the ground and kills with a bite to the neck. They are also very good swimmers and have been known to kill prey while swimming.

Tigers essentially live solitary lives, except during mating season and when females bear young. They are usually fiercely territorial and have and mark their large home ranges.

REPRODUCTION: Mating Season: In tropical climates, mostly from around November to April; during the winter months in temperate regions.

Cubs follow their mother out of the den at around 8 weeks and become independent at around 18 months of age. They leave their mothers at about 2 ½ years. Mothers guard their young from wandering males that may kill the cubs to make the female receptive to mating.

Click to see our Bronze Tiger Statues
Donate to: DEFENDERS OF WILDLIFE
CREATED BY
Richard Devuono
SHARE TO