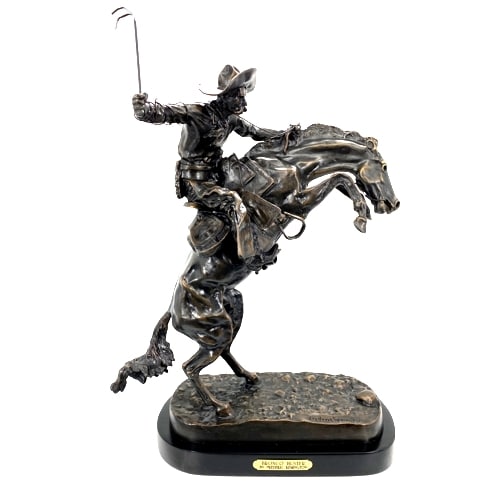 Bronze Remington Bronco Buster Statue. Meticulously handcrafted and fabricated in the timeless lost wax method and a true work of art. A wonderful addition for the home, business, office, restaurant, hotel, or resort. You won’t this bronze Remington statue for less anywhere!

Check our references https://bronze-depot.com/references and see a list of satisfied customers. Click here Better Business Bureau and see our unblemished record of more than 25 years in business without a single complaint. Beware of companies that use inferior material or take deposits and don’t deliver. Do your due diligence and always check with the B.B.B. before purchasing.

To order or for additional information call Richard (Hablo Español) at 321 804 4642 or mailto:bronzedepot1@aol.com

Information about the famous artist.

Frederic Remington (1861-1090) was an American painter, illustrator, sculptor, and writer who specialized in depictions of America’s Old West. He focused on scenes from the late 19th century within the Western United States. He was and still is the most well-known American artist of the Wild West. His paintings, writings, illustrations, and drawings were regularly featured in numerous publications like Harper’s Weekly, Colliers and Scribner’s to name a few. His love of the Wild West dictated his artistic career. Remington coined the phrase men with the bark on which referred to the cowboys, trappers, and soldiers of the Wild West, usually the subjects of his paintings and sculptures.

Remington was a big admirer of President Theodore Roosevelt. The men had much in common. They were both failed at trying to be ranchers and both were writers. Roosevelt had seen some of Remington’s illustrations in a Harper’s magazine and commissioned Remington to create numerous illustrations. This project boosted Remington’s career and the two men formed a mutual admiration bond so strong that later Remington was able to witness many of Roosevelt’s conquests including being present with Roosevelt and his Rough Riders at The Storming of San Juan Hill in Cuba during the Spanish American War of 1898.