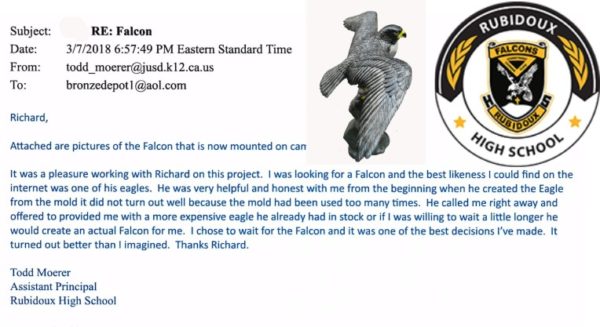 Attached are pictures of the Falcon that is now mounted on campus.

It was a pleasure working with Richard on this project.  I was looking for a Falcon and the best likeness I could find on the internet was one of his eagles.  He was very helpful and honest with me from the beginning when he created the Eagle from the mold it did not turn out well because the mold had been used too many times.  He called me right away and offered to provided me with a more expensive eagle he already had in stock or if I was willing to wait a little longer he would create an actual Falcon for me.  I chose to wait for the Falcon and it was one of the best decisions I’ve made.  It turned out better than I imagined.  Thanks Richard.