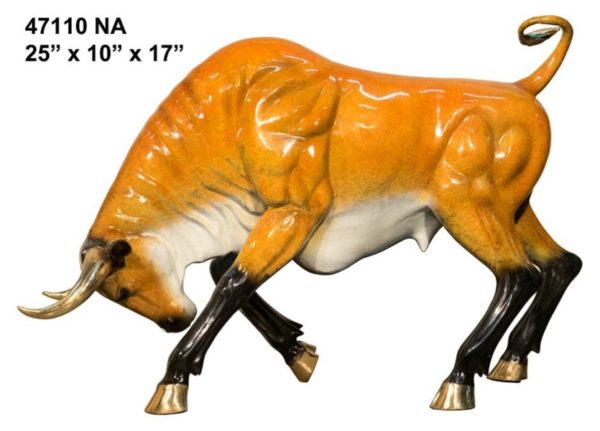 Bronze Bull Statues. Fabricated in the lost wax method and a true work of art. Perfect for school mascot, the home, desk, tabletop, office, lounge, and restaurant. We can custom fabricate any bronze statue you require at an affordable price.

Check our references https://bronze-depot.com/references and see a partial list of our satisfied clients. You won’t find this high-quality sculpture for less anywhere.

Bullfighting is one of the oldest and most unique traditions in Mexico – and also one of the most controversial. The object of bullfighting is for the matador, or bullfighter, to kill the bull by placing a sword in a specific area between the animal’s shoulders. The sport is legal in only a few countries worldwide, including Mexico, Spain, France, Portugal, Colombia, Venezuela, Peru, and Ecuador. Tourists hoping to catch a bullfight on a visit to Mexico do so in the city of Merida, which is home to a bullring known around the country.

Bulls are much more muscular than cows, with thicker bones, larger feet, a very muscular neck, and a large, bony head with protective ridges over the eyes. These features assist bulls in fighting for domination over a herd, giving the winner superior access to cows for reproduction. The hair is generally shorter on the body, but on the neck and head, there is often a mane of curlier, wooly hair. Bulls are usually about the same height as cows or a little taller, but due to their additional muscle and bone mass usually, weigh far more. Most of the time, a bull has a hump on his shoulders and when full-grown, he can weigh as much as 2,000 pounds.

Bull’s horns tend to be thicker and somewhat shorter than those of cows, and in many breeds, they curve outwards in a flat arc rather than upwards in a lyre shape. It is not true, that bulls have horns and cows don’t. Castrated male cattle are physically similar to females in build and horn shape, although if allowed to reach maturity they may be considerably taller than either bulls or cows, with heavily muscled shoulders. Bulls become fertile at about seven months of age. Their fertility is closely related to the size of their testicles, and one simple test of fertility is to measure the circumference of the scrotum. A young bull is likely to be fertile once this reaches 11 inches. A fully adult bull may be over 40 inches. Bulls have a fibro-elastic penis. Given the small amount of erectile tissue, there is little enlargement after erection. The penis is quite rigid when non-erect, and becomes even more rigid during erection. The protrusion is not affected much by the erection, but more by relaxation of the retractor penis muscle and straightening of the sigmoid flexure. Bulls are occasionally affected by a condition known as the corkscrew penis.

A common misconception widely repeated in depictions of a bulls behavior is that the color red causes the bull’s anger, inciting them to charge. In fact, like most mammals, cattle are red-green color blind. With bullfighting, it is the movement of the matador’s cape, and not the color, which provokes a reaction in the bull.

Adult bulls weigh between 1,100 and 2,200 pounds. They are capable of aggressive behavior and require careful handling to ensure the safety of humans and other animals. Interestingly dairy breeds may be more prone to aggression, while beef breeds are somewhat less aggressive, though beef breeds such as the Spanish Fighting Bull and related animals and likewise noted for aggressive behavior, which is further encouraged by selective breeding.

Many livestock-related fatalities in Canada are a result of bull attacks, and less than one in twenty victims of a bull attack survive. Dairy breed bulls are especially dangerous and unstable. The hazards of bull handling are a major cause of injury and death for dairy farmers in the United States. The need to transfer a bull in and out of a pen to cover cows exposes the handler to a serious threat of injury and possibly death. Getting trampled, jammed against a wall or gored by a bull were some of the most frequent causes of death in the dairy industry before the 1940s.  Sometimes a gentle bull, not a vicious one often kills or maims a cowhand.