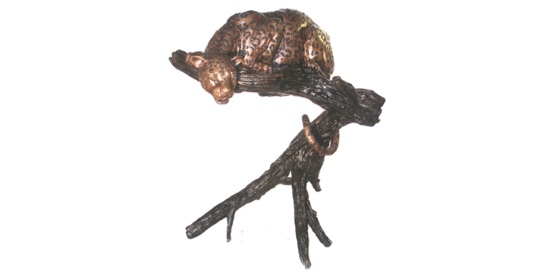 Endangered Species Act (ESA): Jaguars are listed as endangered under the ESA, and in danger of extinction within the foreseeable future throughout a significant portion of their range. Our friends at DEFENDERS OF WILDLIFE have given us their permission to share this important information about the plight of Jaguars in the wild and their ADOPT A JAGUAR Program. Your donation supports DEFENDERS OF WILDLIFE work to ensure that jaguars remain protected under The Endangered Species Act and their efforts to educate the public about the threats Jaguar’s face.  If you would like to make a donation to the DEFENDERS OF WILDLIFE Adopt a Jaguar program please click on the link at the bottom of this blog. If you are interested in purchasing a bronze jaguar replica statue for a mascot, Zoo, or Wildlife Park click our link at the bottom of this blog. Bronze-Depot.com will make a donation from the sale of each jaguar statue to ADOPT A JAGUAR.

The Jaguar is the largest cat in the Americas and the third-largest living feline species, after the tiger and lion. The has a compact body, a broad head, and powerful jaws. Its coat is normally yellow and tan, but the color can vary from reddish brown to black. The spots on the coat are more solid and black on the head and neck and become larger rosette-shaped patterns along the side and back of the body. According to one indigenous myth, the jaguar acquired its spotted coat by daubing mud on its body with its paws.

As a top-level carnivore, the big cat helps prevent overgrazing of vegetation by keeping its prey populations in balance. Jaguars are also important in human culture, frequently playing a central role in stories, songs and prayers of indigenous people. Yet today, jaguars have been almost completely eliminated from the United States.

POPULATION: At best, only an estimated 15,000 jaguars remain in the wild. Bi-national conservation efforts have been successful at protecting a small population of 80 to 120 cats in the remote mountains of Sonora, Mexico bordering Arizona.  This population is the largest of three known to remain in Sonora, and is the last hope for recovery in the United States.

RANGE & HABITAT: The mighty jaguar once roamed from Argentina in South America all the way up to the Grand Canyon in Arizona. Today, jaguars have been almost completely eliminated from the United States and are endangered throughout their range, which stretches down to Patagonia in South America. The jaguar makes its home in a wide-variety of habitats including deciduous forests, rainforests, swamps, pampas grasslands and mountain scrub areas.

BEHAVIOR: Jaguars are solitary animals and live and hunt alone, except during mating season. The male’s home range is between 19 and 53 square miles and often overlaps with the smaller home ranges of multiple females. A male aggressively protects his home range and resident females from other males.

SPEED TO BURN: The jaguar hunts mostly on the ground, but it sometimes climbs a tree and pounces on its prey from above. It has very powerful jaws and sharp teeth and usually kills its prey with one crushing bite to the skull. Unlike most big cats, the jaguar loves the water — it often swims, bathes, plays and even hunts for fish in streams and pools. Like all members of the big cat family, jaguars can roar. The jaguar’s roar sounds like a deep, chesty cough.