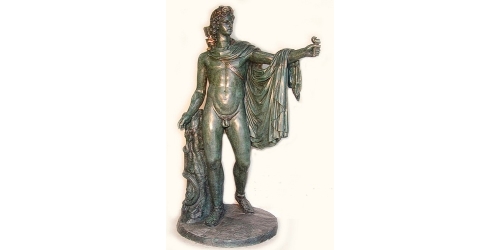 Tin must be mined mainly in its’ ore form, cassiterite and then smelted separately before being added to molten copper to make the bronze alloy.

Tin-based bronze came into existence late in the third millennium B.C. Bronze is a metal alloy that consists mainly of copper though other elements such as tin are added along with aluminum, phosphorus, and manganese. It is characterized by its hardness, but was known to be brittle. Its use became so widespread that the period of antiquity known as the Bronze Age was named for this metal alloy, a period of time particularly known for its skilled metalwork. Before bronze copper was the metal of choice, but the addition of tin gave way to the much stronger new metal.

Bronze was used to make weapons, tools, and armor, but it was also used extensively in the creation of art; and indeed, even functional bronze items were often treated to artistically rendered decoration. The earliest tin-bronzes (an earlier bronze was composed with arsenic) originated in Susa and other nearby cities of Mesopotamia. Trade helped nurture the production of bronze since copper and tin ores were seldom found in the same areas.

As an artistic medium, bronze was extensively used by artists and artisans. Bronze was famously employed in sculpture. An early example of bronze statuary comes from India’s Chola Empire in Tamil Nadu. The Kingdom of Benin famously produced bronze heads. The Greeks, Egyptians, and Chinese of antiquity are also revered for their sculptures as well as other bronze artworks. The use of bronze became widespread and the Bronze Age chiefly lasted until 1200 B.C. Many cultures influenced bronze casting with advancements during this period which also increased bronze usage for artistic purposes.

Ancient bronze art is known for its great beauty. Many bronze artifacts were once used ceremonially especially in places like China. One early example of a Chinese bronze is a vessel that may have been created as early as 722 B.C. and depicts a pattern of interconnecting dragons. Other beautiful and intricately carved bronze vessels are some of antiquity’s best known works of art. As a medium, bronze allowed for great detail and sophisticated artistry.

Although iron eventually supplanted bronze in many industries, bronze remained an important art medium. In fact, some of the most famous bronze art works date to the artist Rodin who lived from 1840 to 1917. While the ancients knew of a wax process used to mold bronze, it has been lost to time, but the production of bronze art works has continued into the present making the most of new technologies. Contemporary artists continue to produce bronze objects of art in all manner of artistic styles.