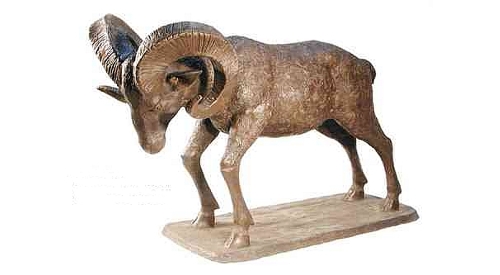 Our friends at DEFENDERS OF WILDLIFE gave us permission to post this profile about The Big Horn Sheep. As animal activists, and lovers we would like to help put out the word about the Nevada Bighorn Sheep and the Peninsular Bighorn Sheep, the latter of which is a distinct population segment of the Desert Bighorn Sheep. Both are listed as endangered under the federal Endangered Species Act (ESA). To make a donation to DEFENDERS OF WILDLIFE please see their link at the bottom of this blog. If you are interested in purchasing a bronze replica of the Big Horn Sheep or similar Sheep or Ram species for a school mascot, zoo, restaurant or storefront conversation piece click our link at the bottom of this blog.

Bighorn Sheep (Ovis canadensis) one of two species of mountain sheep in North America. They range in color from light brown to grayish or dark and have a white rump and lining on the backs of all four legs. Bighorn sheep get their name from the large, curved horns on the males, or rams. They are legendary for their ability to climb high, steep, rocky mountain areas.

DIET: Bighorn Sheep eat different foods depending on the season. During the summer, they subsist on grasses or sedges. During the winter they eat more woody plants, such as willow, sage and rabbit brush. Desert bighorn sheep eat brushy plants such as desert holly and desert cactus.

POPULATION: At the beginning of the nineteenth century, there were between 1.5 million to two million bighorn sheep in North America. Today, there are less than 70,000.

RANGE: Bighorn sheep were once widespread throughout western North America. By the 1920’s, bighorn sheep were eliminated from Washington, Oregon, Texas, North Dakota, South Dakota, Nebraska, and part of Mexico. Today, populations have been re-established through transplanting sheep from healthy populations into vacant places.

BEHAVIOR: Bighorn sheep live in herds or bands of about 5 to 15 ewes, lambs, yearlings, and two-year olds. Groups of males are much smaller, usually numbering two to five. In the winter, the ewe herds join to create bands of as many as 100 animals. In the fall, the rams compete for ewes by having butting contests. They charge each other at speeds of more than 20 mph, their foreheads crashing with a crack that can be heard more than a mile away. These battles may last as long as 24 hours.

Lambs are born with a soft, woolly, light-colored coats and small hornbuds. Within a day, a lamb can walk and climb as well as its mother. A lamb will stay with its mother for the first year of its life.

THREATS: Hunting, loss of food from livestock grazing and disease from domestic livestock have devastated bighorn sheep populations. While livestock is not as much of a threat as in the past, loss of habitat from development is an increasing threat. Normally, predators like mountain lions, wolves, bobcats, coyotes and golden eagles do not pose a threat to bighorn sheep. However, in areas where sheep populations are low, the death of a sheep from a natural predator can be a risk to the larger population. Nearly one-third of California’s populations of desert bighorn sheep have died out in the past century. These losses have occurred primarily at lower elevations, where increases in temperature and decreases in precipitation have reduced the amount of vegetation available for foraging and the freshwater springs they depend on for water. More populations of desert bighorn sheep may be at risk as the southwestern climate continues to become hotter and dryer.

LENGTH: Rams are 5 feet 3 inches to 6 feet; ewes are smaller.

REASONS FOR HOPE: The population of peninsular bighorns hit a low of about 280 animals in 1996. Since then, thanks in large part to their inclusion on the federal endangered species list, their numbers have increased to about 600—offering hope that this nimble mountain dweller won’t fall off the precipice.