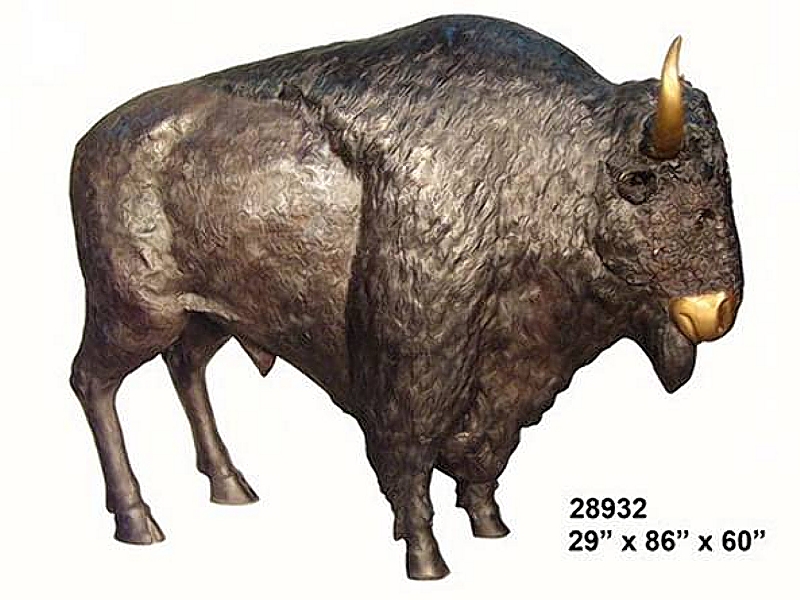 Bronze Bison Statue. Perfect for a school mascot, restaurant, farm, ranch, trade show display, storefront display or any facility that seeking a quality bronze Bison statue. Fabricated in the lost wax method and a true work of art. An amazing conversation piece and a great photo-op. Can be used indoors or outdoors. This rugged, resilient Bison statue is impervious to the weather. Typical maintenance is washing with soap and water periodically. We provide free mounting tabs and instructions making the installation quick and easy. Check out our references https://bronze-depot.com/references and see a partial list of our satisfied clients, especially the schools that trusted us with their mascot. You won’t find this Bison for less anywhere.

Did you know this about Bisons?

BEHAVIOR: The trails carved by animals like bison and deer in their seasonal migrations formed some of the earliest traceable paths into the American wilderness, and were followed by Native Americans, explorers, and pioneers.

A bison’s thick fur offers great protection against the harsh elements of the American plains. Their winter coat is so thick and well insulated that snow can cover their backs without melting. Known for roaming great distances, bison move continuously as they eat. The females, or cows, lead family groups. Bulls remain solitary or in small groups for most of the year but rejoin the group during mating season. Bison are adapted to the extreme weather conditions of the Great Plains, from summer heat to winter cold and blizzards. In winter, bison can dig through deep snow with their heads to reach the vegetation below. Bison often rub, roll and wallow. Wallowing creates a saucer-like depression in the earth called a wallow. This was once a common feature of the plains; usually, these wallows are dust bowls without any vegetation.

REPRODUCTION: Bulls and cows do not mingle until breeding season. Dominant bulls “tend” to cows, following the cow around until the cow chooses to mate. During this period, the bull blocks the cow’s vision so that she may not see other competing bulls, and bellows at males striving for the cow’s attention.