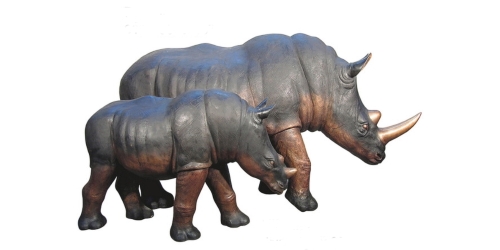 Under the Endangered Species Act (ESA), all five species of rhinoceros are listed as endangered, which means they in danger of extinction within the foreseeable future throughout all or a significant portion of their range.

The black, and Javan rhinoceroses are all listed as critically endangered, meaning the calculated probability of their extinction in the next 10 years is greater than 50%.  The Indian rhino is listed as vulnerable, meaning its probability of extinction during the next 20 years is at least 10%.  Sadly, the northern white rhino – a subspecies of the white rhino – has been completely wiped out. No animals remain in the wild, and with only 5 left in captivity, this subspecies faces certain extinction, with only the southern white rhino remaining. The white rhino species listed as near threatened, meaning it is close to qualifying for or is likely to qualify for a threatened category in the near future.

Our friends at DEFENDERS OF WILDLIFE have given us their permission to share this important information about the plight the Rhinoceros in the wild and their ADOPT A RHINOCEROS Program. Your donation supports DEFENDERS OF WILDLIFE work to ensure that Rhinoceros remain protected under The Endangered Species Act and their efforts to educate the public about the threats Rhinoceros face.  If you would like to make a donation to the DEFENDERS OF WILDLIFE Adopt a Rhinoceros program please click on the link at the bottom of this blog. If you are interested in purchasing a bronze rhinoceros replica statue for a mascot, Zoo, or Wildlife Park click our link at the bottom of this blog. Bronze-Depot.com will make a donation from the sale of each rhinoceros statue to ADOPT A RHINOCEROS.

DIET: Rhinos are herbivores, meaning they eat only plants. White rhinos, with their square-shaped lips, are ideally suited to graze on grass. Other rhinos prefer to eat the foliage of trees or bushes.

POPULATION: Currently estimated populations: Black Rhino (Diceros bicornis): 4,880White Rhino (Ceratotherium simum): 20,165 Sadly, the northern white rhino – a subspecies of the white rhino – has been completely wiped out. No animals remain in the wild, and with only 5 left in captivity, this subspecies faces certain extinction. Only the southern white rhino will remain.

Did You Know? Rhinos use their horns not only in battles for territory or females but also to defend themselves from lions, tigers, and hyenas.

RANGE: Rhinos are found in parts of Africa and Asia. Their preferred habitat varies, from savannas to dense forests in tropical and subtropical regions. Black and white rhinos are found in Africa, primarily in the southern and eastern countries. The Sumatran rhino is found in Indonesia and Malaysia. The Javan rhino, once found in a number of Asian countries, today lives only in Indonesia and Vietnam.   Similarly, the Indian rhino once roamed across most of the Indian subcontinent, but today is only found in small sections of India and Nepal.

REPRODUCTION:Males and females frequently fight during courtship, sometimes leading to serious wounds inflicted by their horns. After mating, the pair go their separate ways. A calf is born 14 to 18 months later. Although they nurse for a year, calves are able to begin eating vegetation one week after birth.

THREATS: Rhinos rank among the most endangered species on Earth. Valued for their horns, they face a dire threat from poaching, which is rapidly pushing them towards extinction. Their horns are used in traditional Chinese medicine, as well as carved into jewelry, dagger handles, and other trinkets.  Rhino horns have become so valuable on the black market that thieves are stealing them from museums and game trophies shot long ago. Adding to the problem is the fact that for some species, the Sumatran rhino particular, over-hunting has occurred for so long that the remaining population is broken into disconnected groups, unable to breed and to continue adding to the species genetic diversity. The biggest threat to rhinos is poaching – they are killed for their horns, which are sold in the illegal wildlife trade. One way to confront this threat is to decrease the demand for these products. The U.S. is the second largest consumer of illegal wildlife products in the world, so decreasing the demand here at home can have a great impact wildlife on the ground, even half a world away.