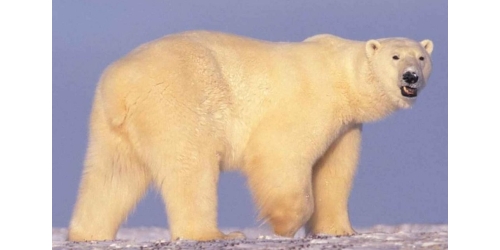 Arctic National Wildlife Refuge, for all its unique beauty, is under assault. The oil industry and its political allies continue to launch attacks to open this national treasure to destructive oil and gas drilling, while climate change threatens to disrupt its habitats faster than wildlife can adapt.

UCN Red List: Vulnerable. In May 2006, the International Union for the Conservation of Nature (IUCN) added the polar bear to its Red List of the world’s most imperiled animals, predicting a 30% reduction in the polar bear population in the next 45 years.

Our friends at DEFENDERS OF WILDLIFE have given us their permission to share this important information about the plight of Polar Bears in the wild and their ADOPT A POLAR BEAR Program. Your donation supports DEFENDERS OF WILDLIFE work to ensure that Polar Bears remain protected under The Endangered Species Act and their efforts to educate the public about the threats Polar Bears face.  If you would like to make a donation to the DEFENDERS OF WILDLIFE ADOPT A POLAR BEAR program please click on the link at the bottom of this blog. If you are interested in purchasing a bronze bear replica statue for a mascot, Zoo, or Wildlife Park click our link at the bottom of this blog. Bronze-Depot.com will make a donation from the sale of each bear statue to ADOPT A POLAR BEAR.

Polar bears are the largest land carnivores in the world, rivaled only by the Kodiak brown bears of southwestern Alaska. Polar bears sit at the top of the food chain in the biologically rich Arctic. The most carnivorous of the bear species, polar bears feed primarily on the fat of ice-dependent seals. The remains of these seals provide food for many other Arctic wildlife species, giving polar bears a vital role in their ecosystem.

Polar bears are marine mammals and spend much of their time on Arctic sea ice. Many adaptations make polar bears uniquely suited to life in icy habitats. Their fur is thicker than any other bears’ and covers even their feet for warmth and traction on ice. A thick layer of blubber beneath their fur provides buoyancy and insulation. The long neck and narrow skull of the polar bear probably aid in streamlining the animal in the water while warming the air that they breathe, and their front feet are large, flat and oar-like, making them excellent swimmers. Polar bears have black skin to absorb heat, but their fur appears white to blend in with their environment.

POPULATION: The World Conservation Union (IUCN) estimates that there are between 20,000-25,000 polar bears in the world.

RANGE & HABITAT: Polar bears are only found in the Arctic. The most important habitats for polar bears are the edges of pack ice where currents and wind interact, forming a continually melting and refreezing matrix of ice patches and leads (open spaces in the ocean between sea ice). These are the areas where polar bears can find the greatest number of seals. As the sea ice advances and retreats each season, individual polar bears may travel thousands of miles per year to find food. Polar bears are distributed throughout the Arctic region in 19 subpopulations, including Alaska, Canada, Russia, Greenland, and Norway.

BEHAVIOR: Polar bears are highly dependent on older stable pack ice in the Arctic region, where they spend much of their time on the ice hunting, mating and denning. They are generally solitary as adults, except during breeding and cub rearing. Polar bears are strong swimmers, and individuals have been seen in open Arctic waters as far as 200 miles from land, although swimming long distances is not preferred since it requires so much energy for adults and can be fatal to younger bears. Unlike brown bears, males and non-breeding females do not hibernate in the winter.

REPRODUCTION: Pregnant polar bears need to eat a lot in the summer and fall build up enough fat reserves to survive the denning period. They seek out maternity dens in October or November. Most maternity dens are located on land where snow accumulates including along coastal bluffs, river banks or pressure ridges on sea ice.  Sows give birth to usually 1 or 2 one-pound cubs and then nurse them until they reach about 20-30 pounds before emerging from the den in March or April. The young are born from November through January while the mothers are hibernating. Cubs will remain with their mothers for a little over 2 years. Female polar bears can produce five litters in their lifetime, which is one of the lowest reproductive rates of any mammal.

Mating Season: Late March-May
Gestation: About 8 months with delayed implantation
Litter size: 1 – 4 cubs; though 1 or 2 cubs are most common. At birth, polar bear cubs are 12 to 14 inches long and weigh around one pound.