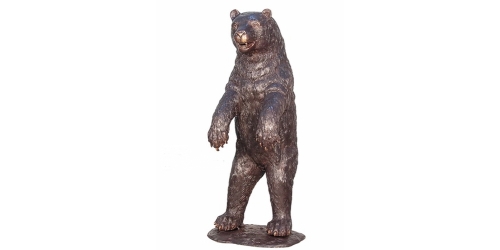 Grizzly bears are majestic symbols of the wild. Bears live in and use a variety of habitat types, playing important roles in each one. This makes them an “umbrella species,” meaning that when we protect them and their habitat we also protect many species. Grizzly bears can also help ecosystems by distributing seeds and nutrients through their scat, and occasionally regulating ungulate populations.

Our friends at DEFENDERS OF WILDLIFE have given us their permission to share this important information about the plight of the Grizzly Bear in the wild and their ADOPT A GRIZZLY BEAR Program. Your donation supports DEFENDERS OF WILDLIFE work to ensure that Grizzly bears remain protected under The Endangered Species Act and their efforts to educate the public about the threats Grizzly Bears face.  If you would like to make a donation to the DEFENDERS OF WILDLIFE ADOPT A GRIZZLY BEAR program please click on the link at the bottom of this blog. If you are interested in purchasing a  Grizzly Bear replica statue for a mascot, Zoo, or Wildlife Park click our link at the bottom of this blog. Bronze-Depot.com will make a donation from the sale of each bear statue to ADOPT A GRIZZLY BEAR.

DIET: Grizzly bears are omnivores, and their diet can vary widely. They may eat seeds, berries, roots, grasses, fungi, deer, elk, fish, dead animals, and insects. In the late summer and early fall, grizzlies enter hyperphagia, a period of 2-4 months when they intensify their calorie intake to put on weight for winter denning. During this time period, they can gain more than three pounds a day!

POPULATION: Though still common in much of Alaska, British Columbia, and Alberta, grizzly bears have been reduced in the lower 48 states from an estimated historical population of 50,000 to only about 1,800 today in five small isolated populations. Most of these grizzly bears are located in Montana’s Northern Continental Divide Ecosystem (including Glacier National Park) and the Greater Yellowstone Ecosystem.

BEHAVIOR: Grizzly bears use “rub trees.” These are trees where they scratch their backs, leaving scent and hair. Biologists can use these trees to collect DNA from many bears living in the area. Grizzly bears are normally solitary animals. However, they are not very territorial and they may be seen feeding together where food is abundant, such as at salmon streams and whitebark pine sites. Bears die when they get into trouble with people’s garbage, livestock when they are hit by cars and trains, or illegally killed. By preventing these conflicts we can keep bears alive and on the road to recovery. Females will rear their cubs for 2-3 years. When a female grizzly bear leaves her mother, they often set up their home range quite close to their mother’s home range. Males will typically range further, but may also remain close by. Grizzly bears need to eat a lot in the summer and fall in order to build up sufficient fat reserves to survive the winter denning period. This is particularly true for pregnant females, who must have sufficient fat reserves to give birth to approximately one-pound cubs in January or February and then nurse them to about 20 pounds before emerging from the den in April or May.

REPRODUCTION: Grizzly bears are one of the slowest reproducing land mammals. Females do not typically reproduce until they are four or five years old. Grizzly bears mate between May and July, but the female’s body delays implantation of their eggs in the uterus until October or November. If the female has not gained enough fat over the summer to survive and raise cubs, implantation may not occur. A grizzly’s ability to garner enough quality calories through the summer is not just crucial for her survival, but also for her reproductive ability. Mother bears rear cubs for two to three years. Males do not help raise the cubs. In fact, males can be a danger to the cubs, so females often avoid male grizzly bears while rearing their cubs.

Mating Season: Early May through mid-July
Gestation: Anywhere from 180-270 days, including delayed implantation.
Litter Size: 1-4 cubs, but the average is 2-3

YELLOWSTONE GRIZZILIES: The 600 grizzly bears of the Greater Yellowstone ecosystem were declared recovered, and removed from the protections of the Endangered Species Act, in 2007. But these bears are not out of the woods yet. A sizable chunk of grizzly bear habitat is found in six national forests around Yellowstone National Park, making careful management of bears on these lands essential to the continued recovery of the species.

The U.S. Forest Service has a clear mandate to protect the bears and to ensure that recovered populations remain viable and persist over time. But the Bush administration’s deregulation of U.S. Forest Service policy disassembled longstanding wildlife standards, placing the Yellowstone grizzlies at risk of sliding back into the danger zone.

Defenders have launched a project to put the pieces back together again—in the Yellowstone area, and across the country. The Your Lands, Your Wildlife campaign is dedicated to ensuring that the Forest Service and Bureau of Land Management adopt wildlife policies that keep common species common, prevent at-risk species from becoming endangered, and ensure that recovered populations, such as the Yellowstone grizzlies, survive and thrive for generations.